If it turns out that the Blockchain/Coin framework turns out to be a good one for banks transferring money around, then the JPM Coin should absolutely obliterate Ripple.

Think about it, let’s say you were in the business of transferring money, why would you take on the exchange rate volatility risk associated with having Ripple as a bridge currency, when you could have a fiat-coin backed by JPMorgan. No brainer. 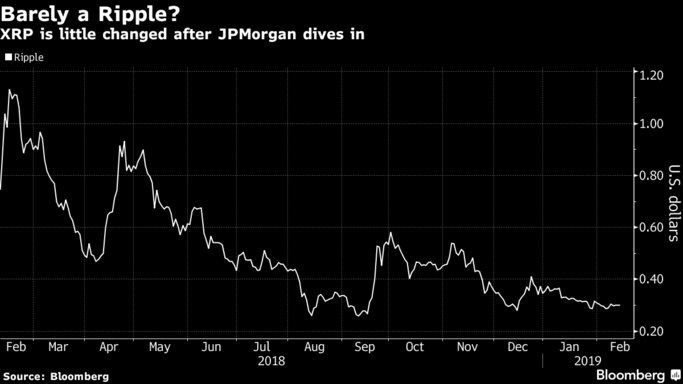 JPM Coin, a so-called stable coin JPMorgan plans for its clients to use in cross-border payments, may be a direct threat to one of the most visible blockchain companies: Ripple https://bloom.bg/2DG5WrW

Executives at major cryptocurrency investment firms such as Multicoin Capital raised a similar issue for XRP.

COULD THE PRICE OF RIPPLE (XRP) DECLINE DUE TO JPMORGAN’S CRYPTO?

The Ripple blockchain network is a payment infrastructure for cross-border transactions which banks and financial institutions can utilize to send and receive payments with low costs and faster clearing time.

RippleNet and XRP serve as the main tools on the Ripple blockchain network that enable financial institutions to clear transactions using the blockchain.

The value of any settlement network comes from its liquidity and on a banking network, the liquidity comes from the number of banks that exist on the network.

Ripple, the company, has been focused on establishing partnerships with both banks and fintech service providers throughout the past several years, primarily to improve the liquidity of the network.

The concerns of industry executives and experts on the long-term growth trend of XRP is that if JPMorgan uses JPM Coin to settle payments between its clients, as the bank said, it will put XRP in direct competition with JPM Coin.

Speaking to CNBC, Umar Farooq, JPMorgan blockchain projects head, said that JPM Coin will have three core use cases and the primary use case is international payments for corporations.

The problem is, that is exactly what Ripple was built for and the company has the same vision as JPM Coin: to overtake SWIFT and establish a global blockchain network for financial institutions.

In November 2018, Ripple CEO Brad Garlinghouse said in an interview with Bloomberg:

The technologies that banks use today that Swift developed decades ago really hasn’t evolved or kept up with the market. Swift said not that long ago they didn’t see blockchain as a solution to correspondent banking. We’ve got well over 100 of their customers saying they disagree.

Essentially, JPM Coin and Ripple have the same use case, are targeting the same market, and are both aiming to overtake the SWIFT network.

Tushar Jain, a general partner at Multicoin Capital, said JPMorgan will “wipe the floor with Ripple,” emphasizing that banks would rather use a technology developed by banks rather than a company outside of the traditional financial sector.

Banks were obviously never going to use XRP for settlements and enrich Ripple Inc (who owns more than half of all XRP). They would rather enrich themselves instead!

Kudos to JPM for being first. They are going to wipe the floor with Ripple. https://www.cnbc.com/2019/02/13/jp-morgan-is-rolling-out-the-first-us-bank-backed-cryptocurrency-to-transform-payments–.html …

Engineers at the lender have created the “JPM Coin,” a digital token that will be used to instantly settle transactions in its wholesale payments business.

354 people are talking about this

The decline in the XRP was accelerated by the inability of the cryptocurrency market to maintain the momentum created in the last quarter last year. But, in comparison to other well-performing cryptocurrencies such as Binance Coin and Bitcoin, XRP has underperformed.

It remains to be seen whether the increasing competition in the blockchain sector and cross-border transactions market will directly lead toward a decline in the price of XRP.

The concerns in the long-term growth of XRP are in the challenging environment Ripple is in following the release of JPM Coin to secure banking partners.