By CCN.com: In a further sign of the blurring of the lines between crypto and mainstream assets, it will soon be possible to trade bitcoin on the Jamaica Stock Exchange (JSE).

The exchange which was founded five decades ago has inked an agreement with Canadian fintech firm Blockchain that will ‘enable live trading of digital assets and security tokens in a regulated and secured environment’, according to a statement.

Under the agreement, Blockstation will offer the end-to-end crypto trading platform for JSE’s network. This followed a test-run in which the broker-dealer members of the JSE participated. JSE’s subsidiary, the Jamaica Central Securities Depository, also took part in the pilot phase.

According to the JSE’s managing director, Marlene Street Forrest, the development will allow the stock exchange to ‘diversify its product offerings’. Additionally, it will allow the JSE to ‘attract new listings and inbound investments’.

As crypto adoption grows, stock exchanges across the globe have seized the opportunities presented by the new asset class. Germany’s second-largest stock exchange, Boerse Stuttgart, is for instance expected to launch a cryptocurrency exchange in the second quarter. Borse Stuttgart is collaborating with German fintech firm solarisBank in this endeavor.

The second largest stock exchange in Germany, the Stuttgart Exchange Group and the banking institute SolarisBank are joining forces to create infrastructure for a zero-fee crypto exchange. While some…

381 people are talking about this

The German stock exchange however already offers a crypto trading app known as BISON. The app is modeled after Robinhood in that it eliminates most fees and charges that other exchanges charge. BISON makes money from the spread. Additionally, users don’t need a bitcoin wallet to trade crypto; just a German bank account.

Last year Switzerland’s SIX Group, the operator of Switzerland’s principal stock exchange SIX Swiss Exchange unveiled a crypto assets exchange. Among the key features of the exchange known as SIX Digital Exchange was allowing users to ‘trade, settle and custodize digital assets in the same way they currently do in the traditional world’. This was in the hopes of attracting users who are turned off by the relative complexity of investing in cryptocurrencies.

While there are those stock exchanges that have already gone ahead and launched digital asset exchanges, many more are waiting in line.

THE IMMENSE POTENTIAL OF CRYPTO

As for-profit organizations, stock exchanges are no doubt attracted to the immense potential in crypto and that’s why they want in. Having grown from zilch barely a decade ago to a market currently worth over $175 billion, the crypto space has indeed outperformed the traditional asset classes. 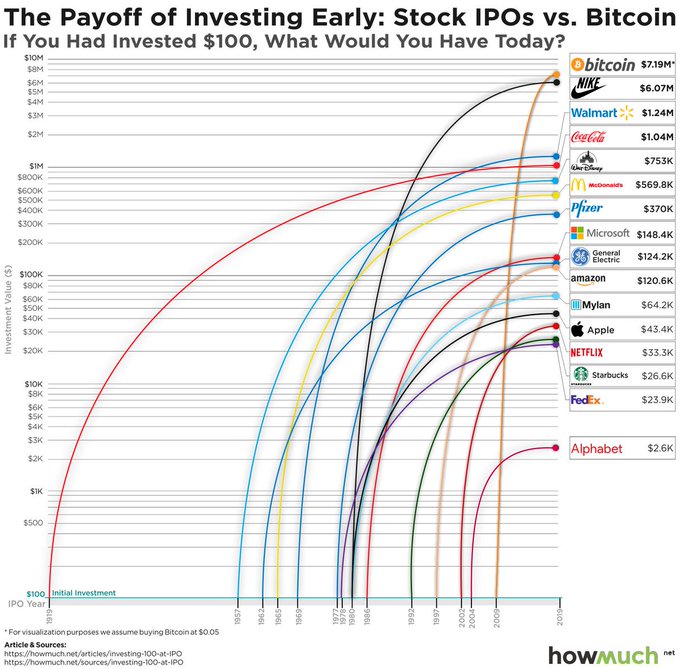 The Payoff of Investing Early: Stocks #IPO VS #Bitcoin

If you have invested $100………..#cryptocurrencies #Crypto #investing #blockchain #FinServ #economy

One of the world’s most-watched stock market indices, the S&P 500 has merely doubled in index points since 2010. Bitcoin, on the other hand, has grown from $0 to more than $5,000 currently during that same period!