Many traders were caught off guard by bitcoin’s recent ascent past $13,000. Suddenly, however, BTC sharply fell by about 20% after reaching a high of almost $14,000.

Many in the Crypto Twitter community were expecting a long consolidation period after BTC dropped by almost 85 percent from all-time highs of $20,000. That’s why some of those who were able to catch the bottom at $3,100 took heavy profits at $6,000, thinking that the market will respect the former resistance. Imagine the look on their faces when the leading crypto token sliced through $6,000 like a hot knife through butter.

Where did these expectations come from?

Simple: many of those who stuck during the 2018 bear market referred to the 2015 crypto winter to look for signs of reversal. In reality, however, bitcoin is behaving like the bull market of 2012. One respected analyst was quick to point out the difference.

On June 24, a pseudonymous account on Twitter named the Crypto Dog, who has amassed 147,000 followers, posted a chart that shows how bitcoin closely resembles the 2012 bull run. It also highlights how the current trend reversal is quite different from the 2015 consolidation. In the tweet, the analyst wrote, “Bitcoin is acting a whole lot more like 2012 than 2015.”

What Does A Bitcoin Crash Look Like From Here? 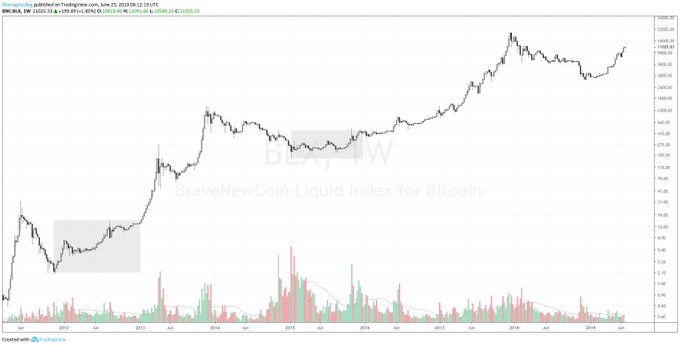 The two key technical differences between the 2012 and the 2015 crypto winters are the patterns and the timeline.

Before bulls launched a parabolic run in 2012, bitcoin had to reverse its trend through a rounding bottom pattern. It took the cryptocurrency over seven months to complete the entire process.

On the other hand, the 2015 downturn needed a double bottom structure to break out of a long bear market. Double bottom patterns take time to build because the asset has to touch the support and resistance levels twice to paint the structure. This is why it took bitcoin around 10 months to complete the reversal.

Strap on Your Seatbelts if Crypto Dog Is Correct

If the analyst is correct that bitcoin is mirroring the 2012 uptrend, expect a ridiculously wild and profitable bull season.

A quick look at the monthly chart shows that in 2015, the king of cryptocurrencies rose from lows of $152.40 in January of that year to highs of $19,666 in December 2017. That’s an increase of over 12,804 percent in less than three years. Although the rise looks impressive, this is but a fraction of what bitcoin gained during the 2012 bull run.

One of John McAfee’s latest tweets seems to support the trader’s bias. He wrote, “My only real talent is math and it is a mathematical certainty that the growth you are seeing is a yawn compared to what’s coming.” 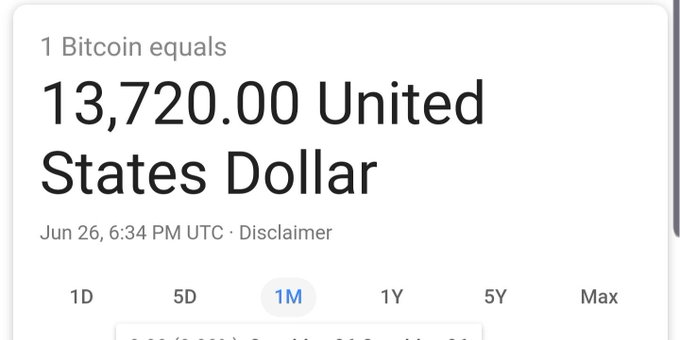 You think this is exploseve growth? LMFAO! Just wait. My only only real talent is math, and it is a mathematical certainty that the growth you are seeing is a yawn compared to what’s coming.

Crypto Dog’s comparison of the recent bitcoin run to the 2012 bull market is an astute observation at the very least. Nevertheless, if the cryptocurrency continues to behave like its 2012, then John McAfee might be correct. An increase of over 50,000 percent from the $3,100 bottom will likely put bitcoin around $1.56 million. Strap on your seatbelts if the first cryptocurrency gets even remotely close to that number.