Why Bitcoin is STILL Undervalued by a Staggering 64%

HomeAnalyticsWhy Bitcoin is STILL Undervalued by a Staggering 64%

The bitcoin price has climbed 30% year-to-date and is holding just under $5,000 after an early-April rally, but it’s still undervalued by a ridiculous margin.

Fundstrat Global Advisors co-founder Tom Lee not only believes that this week’s increase is justified, but he told CNBC the BTC price fails to reflect fair value, which he says is $14,000. Using this measure, bitcoin is currently trading at approximately 64% below its fair market value. Bitcoin still has quite a way to climb to reach its fair value. | Source: CoinMarketCap

Fundstrat’s Lee bases his assessment on the number of active bitcoin addresses coupled with activity per user, which for the most part has not failed him yet. Lee also factors in the bull market and the BTC mining breakeven price, the latter of which has fallen from a range of about $6,000 to $8,000 last year to between $5,000 and $6,000 now.

“A commodity during a bull [market] period — and bitcoin is above its 200-day [moving average] — generally trades two-2.5 times its breakeven. So that would get you around $14,000. But in a bear market, it could trade below its breakeven.” 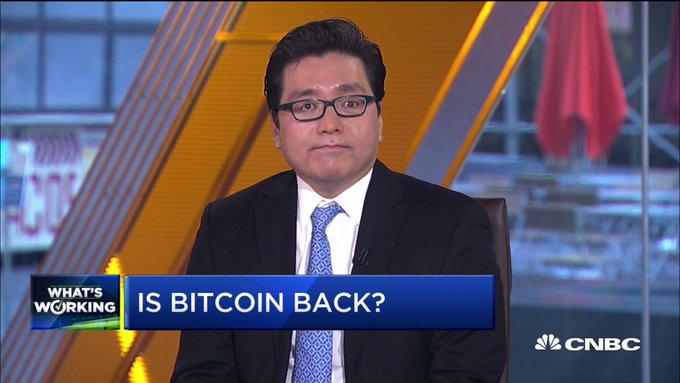 CNBC’s Becky Quick peppered Lee with questions not only about fair value for the bitcoin price but also Lee’s advice that investors should allocate 1% or 2% of their portfolio to cryptocurrency. Quick, who must be risk-averse, quipped that it sounded crazy.

Lee defended his view that even retail investors should earmark a small percentage of their portfolio to bitcoin, saying that for most people, “1% is a small risk bed.” He also noted that bitcoin generates most of its annual gains in the ten best trading days of the year. Without factoring in those days, the BTC price would have actually shed one-quarter of its value each year since 2013.

“You’ve got to essentially hold it or “hodl” it as they say to really capture the gains.”

2/ Reminder that BTC generally generates all of its performance within 10D of any year.
–ex the top 10 days, BTC is down 25% annually since 2013 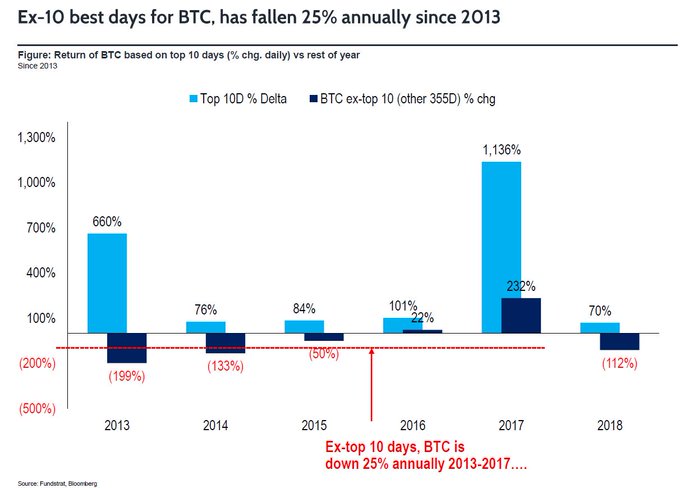 30 people are talking about this

Fundstrat’s Lee, who took a break from bitcoin price predictions after being burned in 2018, has been vindicated in 2019. Before April, the price rose slowly but steadily. By April 1, when it became clear that the bitcoin price wasn’t going to retest $3,000, that’s when “a lot of dry powder” or cash in the crypto community came off the sidelines.

“A lot of the old whale wallets are buying bitcoin…That means just some of the original owners of bitcoin. Some of them who liquidated at $20,000 are starting to buy back.”

Reports suggest it was the bitcoin whales who were responsible for the market’s 20% spikeon Tuesday.

Meanwhile, Lee also points to other catalysts, such as the continued build-out of crypto infrastructure, including Fidelity custody and Bakkt, the latter of which has yet to launch formally. Crypto is also making its way deeper into the populations of troubled economies riddled with inflation and geopolitical unrest, such as Venezuela and Turkey.

BITCOIN ETF: ‘WE’VE BEEN TOO OPTIMISTIC’

One event that didn’t make the catalyst list is the likelihood of a bitcoin ETF. Lee has proven he’s willing to admit when he’s wrong. He’s taking one for the team, but he learned his lesson and didn’t provide a time horizon for when the product might come to market except to say:

“We’ve been too optimistic about it, so I’d say it’s probably a lot later than any of us expect.”

If or when it does happen, Lee says a bitcoin ETF will be a “hugely positive development.”